Grimory turned onto the long dirt road leading to his family’s farm. He slowed his beat up pickup to a crawl as a white Mustang came into view, a woman beside it, her cell phone held high in the air. He pulled up alongside her and pursed his lips—Alisbeth returned the expression. He leaned across the bench seat to roll the window down.

Grimory put his truck in park and slid over to look out the window. “Well, would you look at that. I can, uh—”

“I have Triple A.” She turned her back on him and lifted her phone into the air again.

With a roll of his eyes, Grimory got out and plucked her phone from her fingers. “What good is Triple A when you can’t call them? No service out here. Where’s your spare?”

She pursed her lips at him. “Trunk.”

She glared at him a bit longer, then scoffed and went to the back of the car with him in tow. “You can change my tire, but then I’m leaving.”

He cringed in at the tire. “No. I’m not letting you drive on the highway with this donut. I’ll change the tire, you follow me to my dad’s shop, and I’ll fix the flat. Save you some money, too.”

“The money isn’t my concern.”

He worked to get the car jacked up and eyed her as he freed the bolts. “What’re you doing way out here, anyway?”

“You were supposed to come over this morning. For the project?”

“I told you, Saturdays don’t work for me.”

Her nostrils flared angrily. “And I told you that Saturday is the only day that works for me. What is more important than our project, hmm?”

The boy jerked a thumb at the bed of his truck. “Farmer’s Market. Had to get a few things.”

She eyed the full bed and let out and annoyed breath. “A few. That couldn’t wait?”

Once the spare was on, Grimory turned the flat to look over the tread. “Yep. Ran over a nail.”

“It’s really common on this road. So, yes, I got patch kits. Quit being stubborn.” He shoved the tire into his passenger seat so she couldn’t turn around and leave.

Once her car was back down on all fours, she climbed in and waited for him to take the lead. She parked behind him and got out, her eyes taking in the barn, the workshop, and the house.

“Parents home?” she asked, almost as a precaution.

Grimory stopped as he lowered the tail gate. He stared at the stacks of sacks as his jaw worked behind his skin. “No.”

“Oh. I’m…sorry.” They stood in an awkward silence as he avoided looking at her. “Um, how much for the fix? I have a little cash on me.”

He straightened, set his face in his usual, uncaring manner, and smirked at her. “How about labor for labor?”

“Empty my truck and I’ll fix your tire.” He gently eased her keys from her hand as she eyed everything in the bed of his truck.

“Fine.” She grabbed a sack and brought it forward, then pulled another to her.

“Be careful, those are…fifty…” Grimory watched in a sort of astonishment as she slung a sack over each shoulder and turned to him, “…pounds…”

“Where do you want them?”

She strode to the barn as though carrying hardly any weight at all, Grimory stared after her for a moment longer, then dropped into the driver seat of the Mustang. He pulled the car into the shop, then went to the wide door to watch her clear out the rest of the items. A strange sort of awe stirred in him to see that kind of strength in her.

As Alisbeth turned, dusting herself off, he turned away, pretending to have been occupied with something else the whole time.

“I know you were watching me,” she said, following him into the workshop.

“It’s nice watching someone else do my chores. What of it?”

“Have you ever tried not being an asshole all the time?”

Grimory frowned, then turned a smirk over his shoulder at her. “Naw. I’m too good at it.” His frown returned once he was facing away from her again.

He took a breath and removed his shirt, then set to work fixing the flat. Alisbeth stood back, her eyes scanning over the muscles rippling beneath his skin. By the time he was finished and the tire back on the car, she was biting the inside of her cheek. He moved the car back outside and returned; she forced herself to look away.

“So, uh…interesting taste in music,” he said. “Took you for classical.”

“Classical is too calm. It’s infuriating.”

“So, you listen to metal to relax?”

She realized she’d slid in close to him, smelling his sweat and musk so close. She blinked and nodded. “I like Korn.” She slid just a little closer, her eyes on his lips.

Her eyes slid up the glistening skin of his cheeks to meet his green eyes. “Yeah?”

Instead of saying something, he leaned down to meet her lips with his own. His palm cupped her jaw as the kiss became heated and desperate. His other hand slid down to grab her rear and pull her closer. Suddenly she turned her head to catch her breath.

“Then why are you gripping my belt buckle?”

Alisbeth looked down and told her hands to let go, but they didn’t. Instead she looked back up at him and pressed back into the passionate kissing. He lifted her onto the work table and she wrapped her legs around his waist. His hands worked to unbutton her blouse, then reached in to run his palms along the soft skin of her abdomen.

“Wait. Wait.” She pushed his hands away and blushed. “I’m not that kind of girl.”

Grimory guessed right there of her virginity and set a gentle palm on her thigh. “Do you want me to stop?”

She bit into her bottom lip and met his gaze, then shook her head.

“Just let me know when, yeah?”

She nodded as he pressed his lips back against hers. One hand slid back into her shirt to set on her waist.

The hand in her shirt slid around to settle over the cup of her bra. “Now?”

His other hand slid up her thigh, then paused just before reaching the area between her legs. “Now?”

She thought on it, then shook her head. “No.”

Both of his hands dragged her forward to push the area between her legs against the firmness in his jeans. Alisbeth gasped and pulled back.

“I-I’m sorry. I have to…” She shoved against him. Pushing him out of her way. “I have to go.” She grabbed her keys and ran to her car as she buttoned up her blouse.

Her music shot to dangerous volumes just before she put the car in gear and peeled out toward the highway.

Grimory ran his hands through his hair and let out a breath, hating himself for being so terrible to her. “She’s just a piece of ass,” he tried to assure himself.

But it was more than that, now. She’d grown on him. And damn if he hadn’t felt something when they kissed. He stared at the dust rising at her retreat until it settled back down, as though maybe she’d come back. But she didn’t. The next dust cloud that came his way was his father’s, who stopped and looked him over, greasy and standing in the doorway, staring off into the distance.

“Dad.” He forced himself to stop watching the road to regard the man he’d know as his father for most of his life. “How’d it go?”

“Went good. Came back for the trailer. You up for helping? Or did you want to keep staring ruefully at the horizon like your favorite kite just flew away?” He chuckled and smirked.

Grimory let his smile slide shyly up one corner of his mouth. “Yeah. Just let me get my shirt.” 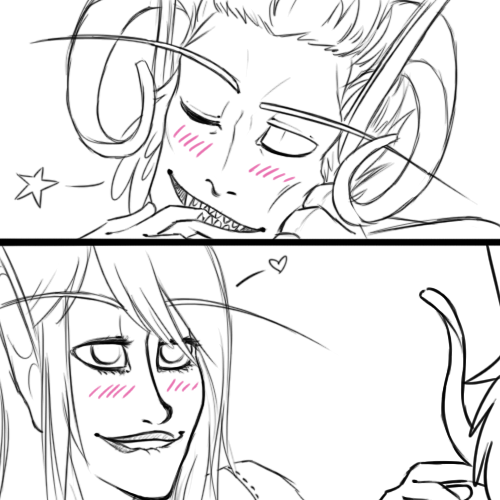