Anarchaia pauses, ignoring the struggling orc to glance behind her and around the feet of the crowd. “I-I don’t…” Her hands raise to her head in panic and she fidgets. “Oh gods, this isn’t good. Diori!” She turns to run, then immediately doubles back around to polymorph the man so he does not follow. “She can’t have gone far. Check to the east. I’ll go west.”

“East. Right. Got it.” Koltira takes off running, images of Alisbeth’s attempt on his life flashing through his mind. This time she’ll make sure I stay dead. Fuck.

Anarchaia grits her teeth as she scrambles to tie her robes at her hip while simultaneously running. “Diori!” she calls, mouth cupped in her hands. Oh gods, please be okay. “Excuse me, have you seen a little high elf girl?  Blonde hair, blue eyes…?”

The tauren woman shakes her head sadly and the mage curses as she runs off.

Koltira makes his way back to the guard from earlier. “The little girl I gave the sword to earlier, have you seen her? She’s missing.”

The orc furrows his brow. “I haven’t, but I’ll spread the word.”

“Blue eyes, blonde hair. Her name is Diori.” Koltira runs the other way to search behind the stage. He gives an absent wave to crew members and the band as he pulls up the platform skirt to look underneath.

Diori glances up as light floods her hiding space below the stage. She hugs her knees closer and sniffles, then buries her face when she sees Koltira peering in at her. “I’m sorry! I didn’t mean to cause trouble!” she sobs into her legs. “I-I just didn’t watch where I was going and…and…”

Koltira crawls to where the little girl is curled up. Unable to sit, he drops onto his belly and leans on his elbows. “Don’t sweat it, kid. Accidents happen and assholes happen. It’s just best if you don’t run away next time you drop a sword on someone’s foot. Stand your ground and apologize. If that doesn’t work, kick their ass.”

Diori bites her lip and sniffles. “I know I shouldn’t have run off…but I was scared, and he was so big. I was afraid that he’d…” She swallows then scrunches her face as if in realization, fresh tears welling in the corners of her glowing eyes. “He hit mask lady. And it was my fault.” She buries her face in her knees again. “I’m not a fighter. Maybe I should just stick to studying Holy.”

Koltira thinks on this and shrugs. “Well, you are the only one that can decide that, right? Personally, I think you spent too long with that…odd…brother of yours. Redblades don’t run from their fear, they spit in its face—don’t spit on people.” He tugs on a lock of Diori’s hair.

Diori looks up and gives the faintest of smiles. She rubs at her eye, then ponders for a moment before nodding and sniffling. “Okay. I’ll be braver next time.” She reaches out and tugs on a lock of his hair in return. “I promise.”

Koltira tugs her hair again. “Do you like funnel cake?”

Diori’s face lights up and she nods emphatically. “Yes! Can we get some!? Ooh! Can we do the shooty game with the bottles, too? They had a huge stuffed kraken plush that I saw!” She holds out her arms to emphasize.

“Yes, we can get funnel cake and play the game and you can shoot until you win the kraken.” He holds out his hand and tilts his head. “Come on, kiddo.”

Diori bounces excitedly, despite the cramped space, and takes his hand, crawling for the edge of the stage and attempting to drag Koltira with her.

Koltira chuckles, then grits his teeth as a guitar strum blares from above and shakes his bones. He crawls faster to get free from beneath the stage.

Diori waits excitedly for Koltira and grabs his hand when he emerges. “To funnel cake!” she screams over the loud screech of reverb. She drags him back to the center of the festival to find a rather roughed-up Anarchaia looking bewildered.

The mage lights up when she sees them. “Oh, thank Gods,” she breathes, running up to them. “Where were you?”

Koltira gives Anarchaia a telling sigh. “We’re off to get funnel cake. Care to join?” He musses up the girl’s hair.

Diori returns the smile and nods. “Can we still play games?”

“Yes, of course.” And no more sword carrying.

Koltira sits down on a bench and groans. “We’ve been here for hours. Are you even a little tired?” he says on a chuckle as he ruffles Diori’s hair.

Diori struggles to hold on to the massive plush murloc in her arms and pouts as her hair is tousled. “No.” She struggles to resist a yawn but ultimately fails.

Anarchaia chuckles and sets a hand on her hip. “I think it’s nearly time to go back. You can’t survive on carnival food all day.”

Koltira grabs the girl and her murloc into his arms. “Probably close to bedtime, anyway.”

Diori kicks her legs feebly and whines. “Nooo,” she moans in a tired voice.

“Yeeeees,” Anarchaia responds in a mimicking tone and chortles. She turns and lifts a hand, opening a portal back to Dalaran. “Young priests need their rest.”

Diori pouts and thunks her head against Koltira’s shoulder. “But I’m having so much fun.”

“I’m sure you can have more fun another day. The Faire will be here all week. For now, Ana is right.” He smiles at the mage and takes the girl through the portal into Dalaran.

“There you are, you bitch!”

Anarchaia whirls around to see the Orc from earlier—tattered and bruised—advancing with his cronies. She gives a nervous wave and quickly steps through the portal. It closes immediately when she steps across. “We can set her in Alisbeth’s room. Heh.”

Koltira smiles down at the mage. “Sounds like a good plan. Not really anywhere else we could take her.”

Once back at the Legerdemain Lounge Anarchaia gives a quiet sigh as she closes the door behind them. “I…honestly didn’t expect babysitting to be so…” She places a hand over her bruised sternum. “Violent.”

Koltira smirks at the mage. “You didn’t have even a little fun?”

Anarchaia gives a comical pout and folds her arms. “I guess,” she mumbles and pretends to pick at her nails. “Could have done without the punching.” She smiles. “What about you? Did the big, bad death knight have fun at the Faire?”

Anarchaia snerks and strides across the room to settle next to Diori on the bed. “I’ll take that as an admission of guilt.”

Koltira scoffs. “I admitted nothing, and I never will.” His gaze comes to rest on the little girl and he sighs. “Still like the idea of children? After today?”

Anarchaia turns her head to look over Diori’s sleeping form for a long moment, then nods as she finds herself smiling. “Yeah. I do.” She reaches up to brush the girl’s soft blonde hair from her face. The sight of Grimory’s prominent nose causes her smile to fade. “They don’t deserve her,” she mutters bitterly.

Koltira sets a hand on the mage’s shoulder. “Maybe not, but there is nothing good that you can do about it. Nor can I.”

Anarchaia’s face softens beneath her mask. She nods and stands. “I suppose that’s true.” Her bones pop as she stretches. “Thank gods for Taveth, then.” She exhales as she deflates again. “They can’t know about us losing her, though,” she continues in a grave voice as she looks up into Koltira’s face.

Koltira shakes his head. “You really think I’d say anything after Lorlathil? Not a word, to any of them. Even Taveth.” He sits beside her on the bed and reaches into her mask to withdraw a lock of ivory hair. He rubs it between his thumb and index finger. “He’s a strange fellow. Kind of…well he’s kind of like you.”

Koltira grits his teeth lightly. “No…? It’s just…you’re both bookish and inquisitive and next to me and Grim and even Ali, you seem small and in need of protection.” He sets his hand on hers and smiles. “But you’re the most powerful of us, he’s just a weird little scholar.”

Anarchaia flushes and turns to hide her already hidden smile. “I-I don’t know if that’s true. He’s definitely quirky, but I’m not sure about weird.” She chuckles. “Though…I’m sure you overheard…”

Koltira chuckles and nods. “He doesn’t whisper quietly when drunk. And yes, you’re the most powerful of us. And yes, he’s kind of weird. I mean, did you see those glasses on him?” Koltira thinks on it and gives her a soft smile. “You like him, don’t you?”

Anarchaia’s blush darkens and she turns to look at him, lips pursed again. “If by like you mean in the realms of friendship, then yes. I like him a lot.”

Koltira laughs outright. “Of course, I meant friendship! You’re already spoken for.” He wraps her in a gentle hug and kisses the top of her head. “You two would be unstoppable with the knowledge you each possess.”

Anarchaia smiles and returns the hug, squeezing him as tightly as his armor will allow. “He should consider becoming a mage. Heh. I bet he’d be better than me.” She rests her temple on his chest. “Probably wouldn’t take him twenty years…”

“Doesn’t he have a sister that’s a mage? I remember him saying something about that. And, no, I think you’d still kick his ass in a fight. I don’t think you realize how much of a badass you are, Ana.” He lifts her mask just high enough to kiss her.

Anarchaia chuckles and nods. “I’ve never had the chance to meet her, however.” She grins sheepishly. “And I’m really not. Stop.”

Koltira nuzzles against Anarchaia’s cheek. “Yes, you are. I really wish you could see yourself through my eyes. Then maybe you’d shut up with this modesty nonsense.”

Anarchaia can’t help but smile at the affection and turns to push her forehead against his. “Couldn’t I say the same thing about you?”

“Yep,” the mage responds in a mocking tone and pulls her mask up to look at him from its shadows. “You’re tactical, intelligent, kind, passionate, and strong. All the things any man should strive to be. It’s why I was attracted to you.”

Koltira snorts and wraps his arms around the mage. “I’ll accept the attraction, but the rest is horse shit.” 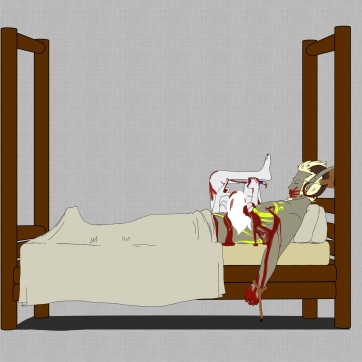 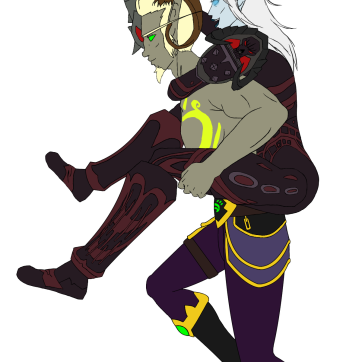